For those of you who missed it, I work at an NGO called Khamir, which supports sustainable livelihoods for artisans and craftspeople in the Kutch region. Considering how very present crafts are in my daily life, I am embarassed at how little I have said about them on my blog. Many people talk about how uniquely colorful Kutch is compared with other parts of India, despite it being a desert. Much of this has to do with the beautiful clothing people wear, but it is also a result of the many crafts that are a part of peoples lives. If you don't have many trees or flowers in your surroundings, you capture the essence of the pockets of beauty you do see and make it a part of yourself.

From the little time I have spent in these craft communities, what sticks is the sense of being contained in the crafts. For the communities, the point isn't the product, but the knowledge and history contained in it. Therefore craft isn't an individual expression (as is art) but the expression of time and a community's identity.

There are dozens of crafts in Kutch, so I am going to focus on just a few, in a series of posts so as not to overwhelm you. 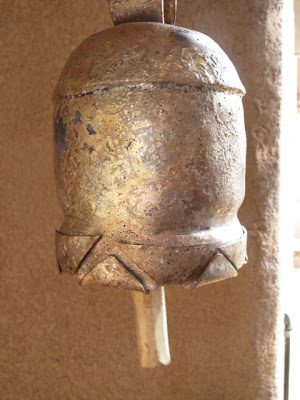 In communities throughout the Banni region, water buffalo and cows are the key to livelihood, as I explained briefly in an earlier post. Water buffalo, cows, sheep, goats, and camels provide milk, which nourishes the family, is a source of income, and acts as a bartering tool in communicating with other communities. They produce dung, which is one of the primary building materials in the Banni region. The first milk that comes out of the cow after it gives birth is even considered to be healing. As is reflected in the multifarious uses of water buffalo and cow products, the communities of the Banni live a generally sustainable lifestyle, making use of all the resources available to them.

Similarly, the development of the bell-making craft reflects the integral role livestock hold in pastoral communities. Originally from Sindh (now a part of Pakistan), the Luhar community migrated to Kachchh hundreds of years ago, bringing with them centuries of experience creating bells to monitor the whereabouts of their cattle.  Today, the Luhar community is spread among five villages in Kachchh, creating bells that communities throughout the region utilize.


In addition to reflecting the livelihood of their community, metal bells also represent a sustainable craft practice in themselves. Created out of recycled waste metal, they are hand shaped, coated in a mixture of local clay and raw cotton, dipped in a mixture of powdered brass and copper, and fired. When the clay/cotton mixture is peeled away, the bells are buffed and tuned, revealing a mix of colors and sounds totally unique from bell to bell. 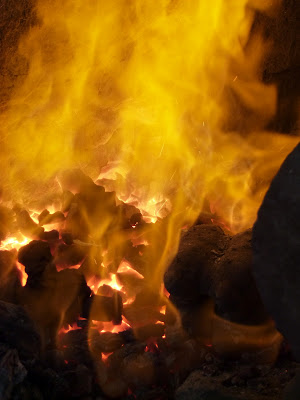 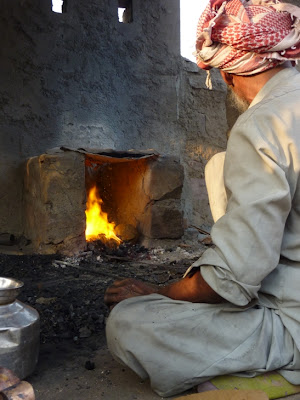 Each bell is tuned to a different note, so that herders can keep track of exactly which cows are where. When an animal is troublesome, the herder hangs a large bell around her neck. The deeper sound of this bell calms the animal, just as it alerts the herder to the whereabouts of their disobedient charges.

Today, the use of Kachchh’s traditional bells has expanded; they hang in entrance ways, are combined with metal frames to create wind chimes, are finely tuned to become musical instruments, and are used as other forms of festive decoration. 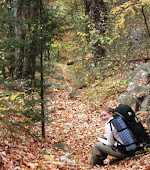